Which configuration must be made to achieve this requirement?

The new nodes must be added to the reporting nodes list.

All nodes must be removed from the reporting nodes list.

The original nodes must be added to the reporting nodes list.

The original nodes must be removed from the reporting nodes list.

For production purposes, an additional 60 similarly configured hosts were added to the environment. Later, the hosts started reporting random QFull errors, and the aggregated performance degraded.

Which two solutions would alleviate the QFull errors and performance problems? (Choose two.)

Download the latest FC HBA driver, firmware, and BIOS, and deploy them on the hosts.

Configure and use additional FC target HBAs in the FAS9000 cluster.

You want to access and mount a Linux L.UN using only iSCSl. In the past, the LUN ha;; been accessed using FC. What must you do to accomplish this task?

Create a new iSCSI igroup. and change the LUN mapping from the original to the new igroup.

Create a new iSCSI Igroup and map the LUN to both the new and existing FC igroup.

Add an iSCSI protocol type to the existing igroup so that the LUN can be accessed by both FC and iSCSI hosts.

An enterprise customer has both a NetApp FAS8200 4-node cluster and a third-party storage array in a shared SAN environment. The host servers connect to both storage vendors' arrays in the fabric.

Regarding (he hosts in this scenario, what are- two NetApp best practices when performing this task? (Choose two.)

Set the default timeout values and storage parameters for the host system.

Always use the same adapter for heterogeneous storage systems.

Use separate adapters to connect to each vendors' storage system.

Which option needs to be set on a volume to guarantee that it cannot be affected by other volumes?

You are installing a NetApp FAS6040 high availability storage system. Which cfmode should be set to ensure proper failover in an HP-UX environment?

Which commands allow you to enable NetApp deduplication and verify space savings?

You currently have a FAS8200 with ONTAP 9.5. You want to expand the front end FC I/O capabilities. However, you are unsure which target adapters are supported.

What would you use to confirm which adapters are supported with your current configuration?

You want to provision an iSCSl LUN.

Which two steps are required to accomplish this task? (Choose two.)

Add the initiator IP address to the igroup.

Map the LUN to the igroup.

Add the target WWPN to the igroup.

Which tool collects configuration data from hosts and switches to assist in evaluating a qualified configuration?

In this scenario, what would cause this problem?

The host and storage are connected to different switches.

The flow control was disabled on the storage.

The hardware initiators were used instead of software.

The flow control is enabled on the storage.

What is the solution to this error?

Add the host WWPN to the subsystem.

Disable the host HBA and re-enable it to clear the buffers.

Add the host NQN to the subsystem.

Use the nvme ns-rescan /dev/nvme0 command to rescan the bus. 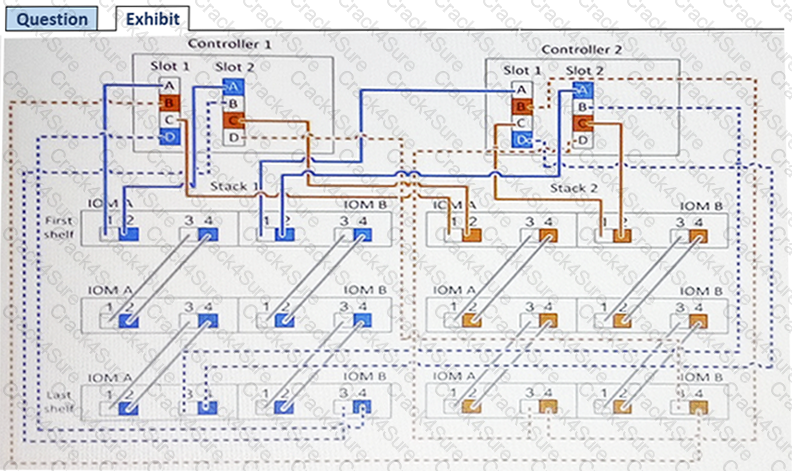 Referring to the exhibit, you have SAN LUNs on an AFF A700s and are asked to test an SSD shelf stack failure.

What is the maximum allowed number of failed paths per controller to shelf stack before a storage failover occurs?

You have a performance critical database application that is running on a FAS9000 controller that uses FC. As shown in the exhibit, volume efficiency is enabled.

If you follow the performance recommendation, what are two results to the data in the volume? (Choose two.)

The new written data is compressed.

The new written data is uncompressed.

The existing data is uncompressed.

The existing data is compressed.

You have finished deploying a Netapp AFF All SAN Array Cluster and want to test the persistent ports feature. In this scenario, how would you accomplish this task?

Perform a takeover of a node

If we don't have OnCommand Insight, then we should not pull out a cable as test because it won't be detected properly.

Doing a planned takeover will meet the requirements asked. 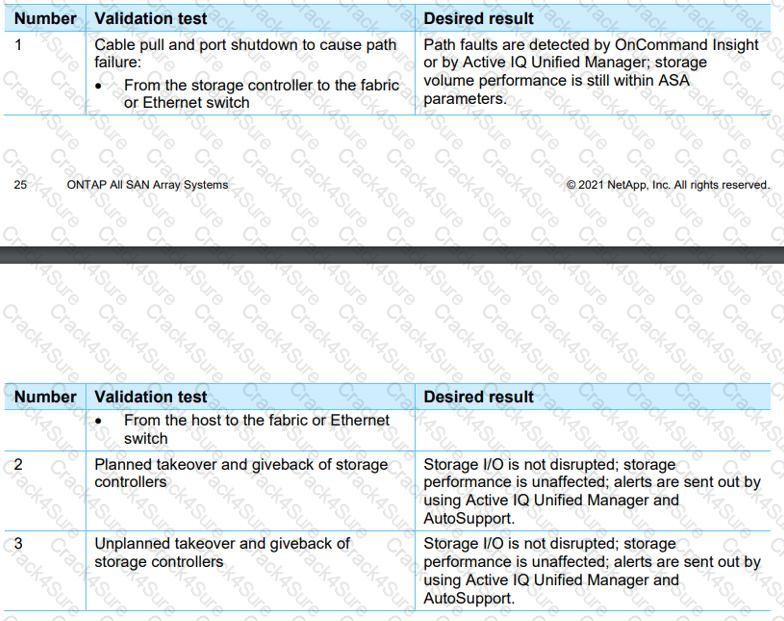 Referring to the exhibit, which WWPN would safely be removed from the zone?

ranges are reserved. To ensure the uniqueness of the Cisco UCS WWNNs and WWPNs in the SAN fabric, we recommend that you use the following WWN prefix for all blocks in a pool:

have supported transceivers. In this scenario which two actions would accomplish this task (choose two)

Use hardware universe to determine the supported transceivers

Use the interoperability matrix tool to determine the supported port speeds

Use hardware universe to determine the supported port speeds

Use the interoperability matrix tool to determine the supported transceivers

A storage administrator needs to ensure that an ONTAP FC LUN is accessible for a remote data center. The ISL ports are reporting errors. The trunkshow command output from a Brocade switch is shown below.

Set the ISL ports as FL_Ports

Set the ISL ports as N_Ports

Set the ISL ports as F_Ports

Set the ISL ports as E_Ports

On each switch fabric, you must configure the switch ports that connect the Inter-Switch Link (ISL). These ISL ports are otherwise known as the E-ports.

A customer wants to deploy NVMe/FC along with an existing FC SAN fabric using ONTAP 9.8. In this scenario, which two actions are correct? (choose two)

Use existing zoning on fabric switches

Upgrade your FC switches from 16GB to 32GB

Because NVMe/FC simply swaps command sets from SCSI to NVMe, it is an easy transition to make. NVMe/FC uses the same FC transport and therefore the same hardware from the host, through the

switch and all the way to the NVMe/FC target port on the storage array. Thus, NVMe/FC implementations can use existing FC infrastructure, including HBAs, switches, zones, targets, and cabling.

You are testing FCP paths failures on a 2-node Netapp AFF All SAN Array and verify that persistent ports are correctly enabled. Before testing, a host sees four optimized paths to a LUN. You perform a

node takeover and re-check the host.

Which statement is true after the node takeover?

The host sees four optimized paths to the LUN

identity of the original LIF, including the WWPNe. Before the status of path to the taken over node is changed to faulty, the shadow LIF appears as an Active/Optimized path to the host MPIO stack, and I/O is

shifted. This reduces I/O disruption because the host always sees the same number of paths to the target, even during storage failover operations.

You are configuring a Windows Server 2019 system to attach to an ISCSI presented LUN. There are multiple physical paths from the Windows Server to the Netapp Cluster. Which two changes are required

to the Windows Server to enable multipath? (choose two)

Select the “enable multi-path” checkbox on the ISCSI software initiator

Select Enable multi-path, select Automatically restore this connection when the computer starts or Add this connection to the list of Favorite Targets, and then click Advanced

A customer has an existing legacy ISCSI storage environment that is connected to upstream network switches with various Windows hosts. The customer wants to purchase a new Netapp array to migrate

their data. In this scenario which two tools would help to validate the prerequisites for this Netapp configuration? (choose two)

ActiveIQ OneCollect is a tool from NetApp that will create an inventory of your environment that will include hosts, switches and storage and validate it against the IMT (Interoperability Matrix Tool).

You have an existing 8-node Netapp Cluster serving NFS data, and you want to expand your cluster by an additional four nodes to serve ISCSI. In this scenario, where would you validate this configuration?

You upgraded your Linux hosts to SUSE Enterprise Linux 15. In this scenario, which two actions should you perform before you test asymmetric namespace access (ANA)? (Choose two)

Verify if the NVMe service has started

Verify if the LUNs and namespaces are in the same volume.

Verify if the version of Netapp ONTAP software is 9.5 or later

Verify if there is only one LIF in the SVM 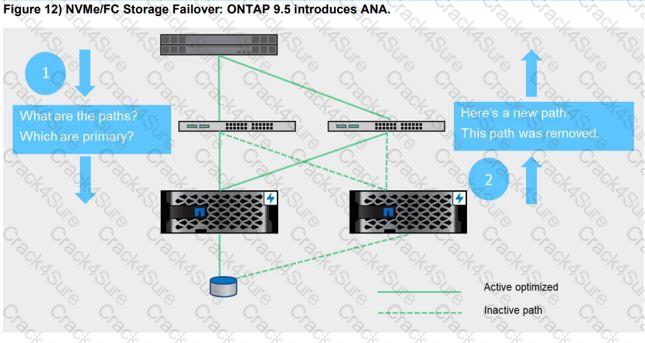 You must relocate a LUN from one AFF A700 HA pair to another AFF A300 HA pair while preserving all storage efficiencies. What are two ways to accomplish this task? (Choose two.)

A company wants to use jumbo frames in their Ethernet network. They should set the packet size to which industry conventional value?

The exhibit shows the Inn show command output for the oradata oraFinProd_l LUN.

Which two statements ate correct about the LUN'? (Choose two.)

The LUN Is thick provisioned.

The LUN type is Windows.

The LUN is thin provisioned.

Referring to the exhibit, what is the total amount of space that is guaranteed for the LUNs in the /vo1/vo1_sanlunsiprod_03 volume?

You are configuring a 4-node AFF A400 ONTAP 9.8 cluster. The data center switches have limited ports, and you are given one 10-Gigabit Ethernet port per node for external access.

In this scenario, which three protocols share the same physical port? (Choose three)

If we have only ethernet switches available, we can only enable protocols over ethernet such as FCoE, ISCSI and Snapmirror.

NVMe/FC and FC need a SAN Fabric switch to work.

What are two benefits of implementing VLANs for ISCSI configuration? (choose two)

When you implement VLANs in large IP network infrastructures, you derive the following benefits:

VLANs enable you to leverage existing infrastructure while still providing enhanced security because they limit access between different nodes of an Ethernet network or an IP SAN.