Questions came word by
word from this dump

For more than a decade, Crack4sure’s 220-1001 CompTIA A+ Certification Exam: Core 1 study guides and dumps are providing the best help to a great number of clients all over the world for exam preparation and passing it. The wonderful CompTIA 220-1001 success rate using our innovative and exam-oriented products made thousands of ambitious IT professionals our loyal customers. Your success is always our top priority and for that our experts are always bent on enhancing our products.

This unique opportunity is available through our CompTIA 220-1001 testing engine that provides you with real exam-like practice tests for pre-exam evaluation. The practice questions and answers have been taken from the previous 220-1001 exam and are likely to appear in the next exam too. To obtain a brilliant score, you need to keep practicing with practice questions and answers.

Concept of CompTIA A+ Exam Preparation

Instead of following the ages-old concept of CompTIA A+ exam preparation using voluminous books and notes, Crack4sure has introduced a brief, to-the-point, and most relevant content that is extremely helpful in passing any certification CompTIA A+ exam. For an instance, our 220-1001 Feb 2023 updated study guide covers the entire syllabus with a specific number of questions and answers. The simulations, graphs, and extra notes are used to explain the answers where necessary.

At crack4sure, we want to facilitate the ambitious IT professionals who want to pass different certification exams in a short period of time but find it tough to spare time for detailed studies or take admission in preparatory classes. With Crack4sure’s CompTIA A+ study guides as well as 220-1001 dumps, it is super easy and convenient to prepare for any certification exam within days and pass it. The easy information, provided in the latest Feb 2023 220-1001 questions and answers does not prove a challenge to understand and memorize. The CompTIA 220-1001 exam takers feel confident within a few days of study that they can answer any question on the certification syllabus.

A computer freezes shortly after loading the operating system. A technician inspects the computer and obtains the following diagnostic information: 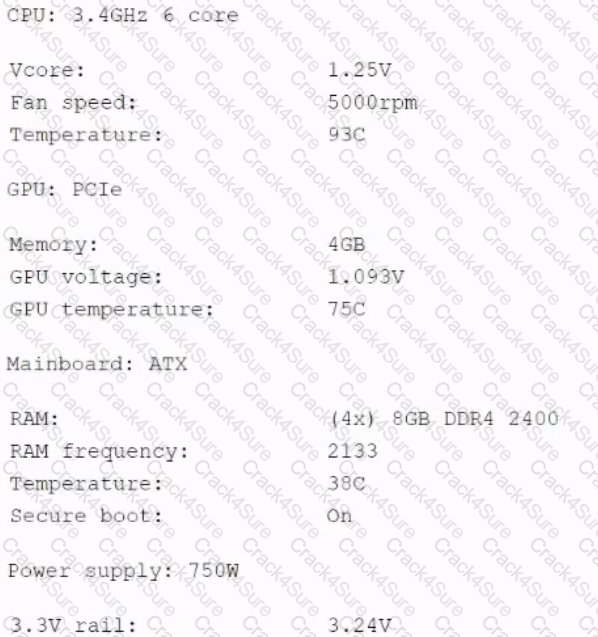 Which of the following should the technician investigate further?

The integrity of the hard drive

After upgrading a laptop's OS from Windows Vista to Windows 10. hard drive activity is elevated when running normal user applications causing the laptop to run slowly. Which of the following should a technician do FIRST?

Replace both of the installed lGB SoDIMMs with compatible 4GB SoDIMMs.

Upgrade the currently installed 500GB SSD with a 1TB SSD

Which of the following server roles would be used to host mapped drives on a corporate network?

A virtual environment in which an application uses memory and a processor from a provider based on a leased rate that depends on the amount of resources used per month is referred to as:

Joe, a user has a laptop that will not power on. After leaving it in the charger for eight hours, the system still fails to power on. Joe calls a technician to diagnose the issue He mentions that he added more RAM to the device two weeks ago but used the laptop several times before this issue occurred When the technician presses the power button to turn on the laptop, the fans do not turn on. and there is no sign of lights or any other activity Which of the following should the technician attempt FIRST?

Swap HDDs and see if the laptop will boot with a known-good HDD.

Reseat the CPU in its socket and attempt to boot again

Test the laptop with a known-good power adapter

Replace the laptop battery cells and attempt to boot again

Remove the memory and test with known-good memory.

Why so many professionals recommend Crack4sure?

Contrary to online courses free, with Crack4sure’s products you get an assurance of success with money back guarantee. Such a facility is not even available with exam collection and buying VCE files from the exam vendor. In all respects, Crack4sure’s products will prove to the best alternative of your money and time.

I must say that crack4sure.com is a blessing for the students like me. Though it was my first time taking CompTIA 220-1001 exam course from here and I am totally satisfied with their Study guide and Practice tests. I passed the exam and secured 775 marks which is really an achievement of mine. I had already recommended it to my fellows and colleagues.

Want to share the great experience I had with crack4sure.com. I purchased their PDF+Testing engine on the behalf of my friend’s suggestion but I was scared of the wastage of my money. I was wrong as their study material was great enough to cover all the major and minor points. I passed CompTIA 220-1001 exam with high score.

Exam dumps for the 220-1001 certification were the latest and quite helpful. Gave a thorough understanding of the exam. Passed my exam with 860 marks.

Thank you for the testing engine software. Great value for money. I got 880 marks in the certified 220-1001 exam. Suggested to all.

I recommend all to study from the exam dumps at Crack4sure. I achieved 885 marks in the 220-1001 certification exam. Great work Crack4sure.

Exam testing software is the best. Purchased the bundle file for 220-1001 certification exam and scored 890 marks in the exam. Thank you Crack4sure for this amazing tool.

Great work for updating the questions and answers from previous exam dumps. Studied from them and passed my certified 220-1001 exam with 850 marks.

Valid exam dumps for the 220-1001 certification exam. I just went through these and luckily all questions were included in the actual exam. I suggest all to prepare for your exam with these.

Great exam answers for 220-1001 certfication. Passed my exam with 870 marks. Thank you so much Crack4sure. Keep posting amazing things.

I would like to recommend the bundle file including exam dumps and practise exam software for the 220-1001 certification exam. Exam practise software helped me prepare so well for the exam that I got an 880 score.

I passed my certified 220-1001 exam in the first attempt. Thanks for providing the latest dumps that are surely a part of the original exam.

Excellent exam dumps for the 220-1001 certification exam. I studied from other sites but wasn't able to score well. Now I got 840 marks. Thank you Crack4sure.